David O’Mara is reminiscing about the job that started it all. “A family friend knew someone who had a painting company and they said, ‘Oh, you’ve been to art college, you’ll be all right!’” He laughs. “But I hadn’t touched a paintbrush in years. I was into conceptual art.”

It was 2001 and O’Mara had just moved from Ireland to London with his girlfriend; he’d never envisaged working on a building site but he needed the work and soon found he could pick up the skills. He also realised the money was good, much better than in the arts. “I looked into working in a gallery, but those jobs are hard to find and often they don’t want to pay you,” he says. “It’s insane. A lot of the time, you need a lot of cultural capital even to be considered.”

And cultural capital – easy familiarity with upper-class values and traditions – was something he didn’t have, despite the art college degree. Born in 1973 and raised in Waterford, south-east Ireland, O’Mara grew up working-class. Discovering fine art through books, he studied in his home city and then at Dublin’s National College of Art and Design, where he became interested in conceptual art and the situationists, the social revolutionaries who inspired Paris’s 1968 protests, and then the punks.

O’Mara got into found photographs through the situationists. Drawing on their ideas about urbanism and the proliferation of images under consumerism, he walked the streets of Dublin looking for abandoned photographs and negatives. When he got to London he continued the practice, walking to work and back to search for lost photos. He also got into the habit of carrying a camera and taking his own photographs, and eventually began shooting at work.

“When I started painting and decorating, I was very intimidated by the environment, but a couple of years in I was much more relaxed,” he says. “I knew everyone around me, and I always had my camera, so I just started taking photographs. No one had a problem with it, though sometimes they took the piss. They were my friends – we worked together, we had a laugh together. It can be a lot of fun on site, there’s a lot of autonomy compared with working in an office.”

O’Mara’s images show some of the sheer toil that goes into the sites, with shots of builders hard at work shovelling or drilling, sparks flying. But there are also photographs that capture the surreal nature of taking a place apart and putting it back together: a pair of feet dangling from the ceiling, for example, or gloves jauntily placed on a ladder. Some of the images show O’Mara’s colleagues giving him the two-fingered salute, or showing him their own photographs on their phones, emphasising his personal connection and a sense of intimacy. Art and manual labour don’t have to be worlds apart, his shots suggest.

The crews in London are multicultural, often including immigrants as well as working-class Brits. O’Mara has seen an Indian carpenter and Polish bricklayer communicating on a job in German, the one language they had in common. He’s also come across some true characters. His first boss was a philosophy graduate whose best friend had gone awol from the military and was sleeping under the kitchen table.

Then there was the electrician who had been expelled from the Jehovah’s Witnesses, and the Polish musician who’d play his own experimental compositions on site. To O’Mara, this music sounded “like noise” but he appreciated the creative spark, as well as others with less obvious flair. “Everyone has a history and a story to tell,” he points out. “Everyone has interests. It might not be official but everyone knows about something.”

O’Mara continued to pursue his art, painting and decorating five days a week, then spending Saturday in the darkroom printing his own images. In the early 2000s he staged a large exhibition he funded by putting in “seven days a week on the sites”. The images were mounted on aluminium, which he then had to heft around whenever he moved house. “I thought, ‘There has to be an easier way!’” he laughs and, remembering his first love of art books, decided to publish a magazine.

Called Detritus, his magazine was printed on newsprint to keep costs down and make it easy to give away. By 2012 O’Mara was also putting together handmade books of his images: one-offs or just a handful at a time, printed on papers he found in the street and housed in boxes or suitcases he found in skips. He created his most recent handmade book a few months ago, printing it on decorator’s lining paper and giving the cover a swipe of house paint. Called Spit and Sawdust, it’s an edition of just five copies, priced at £200 each.

O’Mara claims he’s bad at marketing, and quickly tired of trying to push himself on the London gallery scene. “Hideous,” he calls it. “Going to exhibition openings and trying to network made me paranoid.”. But he managed to get seen on his own terms. He set up an Instagram account, @detrituszine, in 2017 and quickly started to attract photography curators and publishers. He started selling his handmade books via Photobookstore in 2019 after meeting its owner at a photobook festival.

In 2019 he released his first book with a publisher, If you can piss … (the title derived from the building site epithet: “If you can piss, you can paint”), with Jannuzzi Smith Editions. This year he will release another book, In Situ, with “small, punky outfit” Salt n Pepper Press. He decided to work with publishers, he says, because manual labour is seldom shown in photography, let alone taken by the people who do it.

For O’Mara this lack of representation links with a wider malaise and erasure of working-class lives and labour. The traditional route of learning a trade or craft has been devalued, he says, as has nursing, or even teaching; manual work is now seen as “dirty”. This erasure is quite literal on building sites, where the aim is to paint yourself out of the door, then go. “You’re making everything pristine,” he says. “When you leave it shouldn’t look like you’ve been there.”

For O’Mara photography is a way to preserve that labour, as well as the dirt that goes with it; he often uses black-and-white film, partly because it’s cheaper, partly because it can handle the varied light on site, but also because it shows up the grime. “Dirt is a big part of the work,” he says, laughing. “You do get sweaty and filthy. My job is physical and I enjoy that aspect of it, just as I enjoy the physical aspect of printing photographs.”

Thu May 12 , 2022
Harmer’s Town Art Center, Inc., has raised more than $1.1 million for the design and construction of a regional art facility and park in historic downtown Havre de Grace in its first year as a nonprofit, the organization announced in a news release. The funding came from grants and partnerships […] 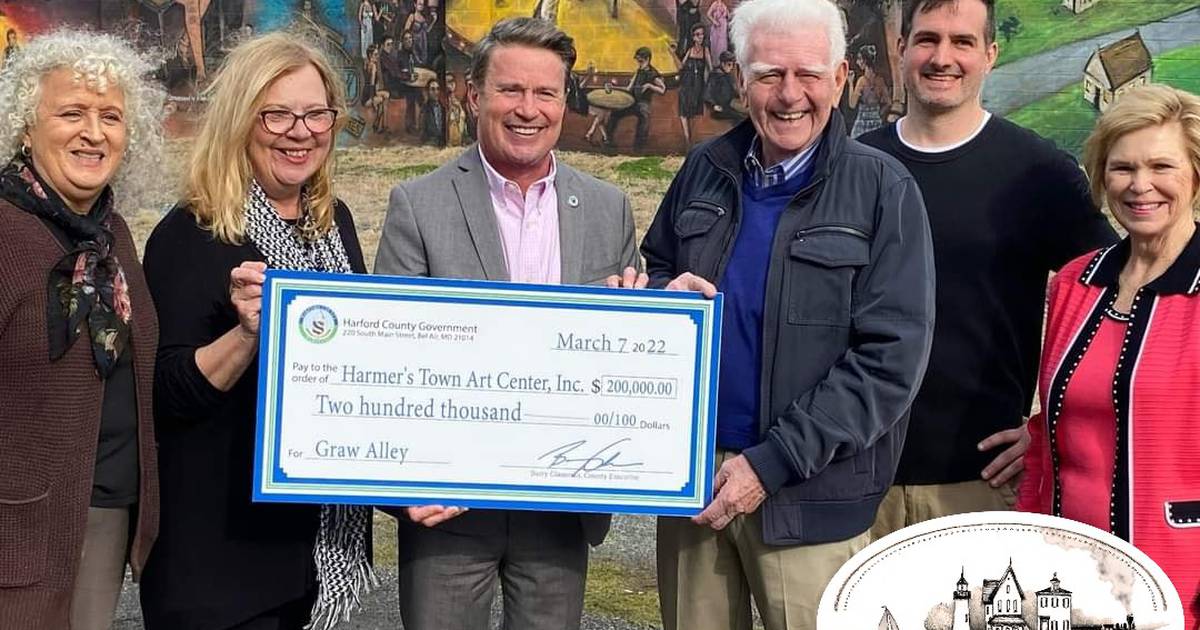