Hopefully y’all like doing things, because there are so many things to choose from that could be done this weekend, we’re not sure how you can avoid it. Look at all these things.

Let’s start with happy hour. Local legends Earl & Them will kick things off at George’s with a happy performance. Later on that evening, Memphis-based country-rockers Lucero are back in town for a sold-out show on Friday night. Also at George’s, there’s a Red Dirt show on Saturday night with Stillwater, OK based band The Great Divide. Here’s ticket info to all those shows.

Also in tunes, locals The 1 Oz. Jig are at Kingfish on Friday night (weather permitting), and you can check out Bootleg Royale and Brujo out there in the Kingfish Backyard on Saturday night.

Up in Springdale, the Black Music Expo we wrote about recently will take place, but will move indoors at the Jones Center due to storms in the forecast. There will be performances on Friday and Saturday by a host of musicians, including Rochelle Bradshaw & Hypnotion, Grammy nominee Carl Thomas, DJ D. Sewell, BAANG, Spida, Big Lowe, BabeeDee Hollywood, Kirk Whalum, and more. Here’s the full lineup including more information. It’s free!

How about some sports. The Razorback baseball team is taking on LSU in a three-game series this weekend at Baum Walker. The Hogs beat the Tigers 5-4 in game one on Thursday, and they’ll take them on Friday night at 5 p.m., and on Saturday at 2 p.m.

Also in sports, the Hog fotball team will host an open scrimmage on Saturday at Razorback stadium. It’s a situational scrimmage instead of a full spring game that they’ve hosted in the past, in part because the week the actual Spring Game would have taken place next weekend, a fella by the name of Garth Brooks is using the venue for a concert. Here’s a preview of the scrimmage on Saturday.

The Arkansas softball team is killing it this year as well, and they’re taking on Kentucky at Bogle Park this weekend.

The Farmers’ Market is happening on Saturday morning on the square. Everyone’s gonna be down there, of course.

The Battle of Fayetteville commemoration event at the Headquarter’s House and Museum will also take place on Saturday. Here’s more about that.

There’s an art show inside the NWA Mall this weekend. It’s called Nostalgia, curated by local artist Alex Bodishbaugh, and will feature work by 28 local, regional, and national artists. The Friday and Saturday shows will be open from 6-9 p.m. It’s a ticketed event. Here’s more about the show, and here’s where to purchase tickets.

Sunday is Easter, so hopefully all your baskets will be full this year, and that someone you know knows how to make killer deviled eggs.

There’s so much more below. Have fun, buds.

Sat Apr 16 , 2022
The Central Michigan University Art Gallery currently features a cow made out of recycled fast-food containers, jackets made from fast-fashion packaging and a representation of the Earth’s potential future. With those projects and many more set up in a maze, the exhibition takes you through five key sections related to […] 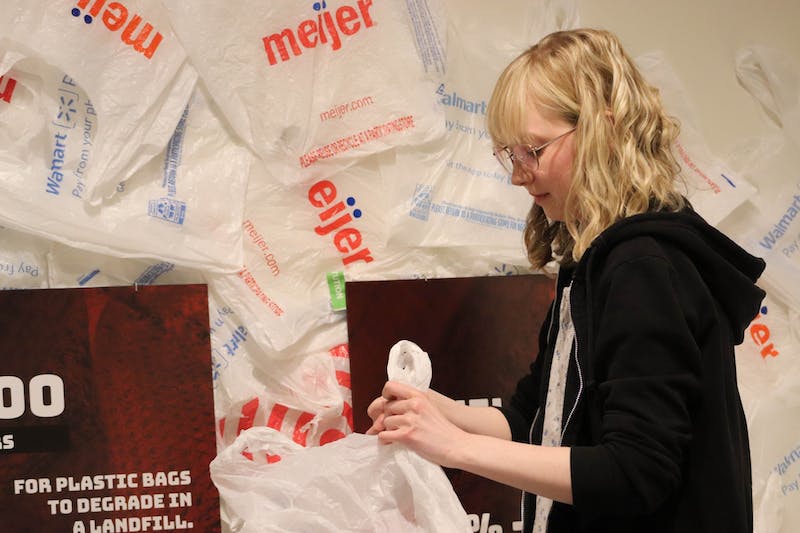