Like most friends, Jonathon Matwijec-Walda and Adam Chrisman have been pursuing their professional goals separately.

A coffee lover, Matwijec-Walda worked part-time at Character Coffee in Utica and was involved with the Rome Capitol Theatre and in the Rome City School Board. Chrisman, an artist, has owned the art gallery the Copper Easel in downtown Rome since 2019.

The duo came together last year to combine their businesses and create something new. The result is coffee shop Superofficial, opening soon at the Copper Easel at 216 W. Dominick St. in Rome. While there isn’t a target opening date yet, they hope to open sometime in April.

During his time at Character Coffee, Matwijec-Walda brought a coffee cart at Copper Easel’s events. This combination attracted many people, he said.

What to expect at Superofficial

The Copper Easel closed Jan. 1, and the two friends have been renovating the space. When finalized, the gallery will feature artwork and jewelry from more than 20 local artists, a bar with a seating area and space for events and workshops.

Superofficial’s menu will be simple, Matwijec-Wald said. He wants to appeal to coffee connoisseurs, casual coffee drinkers and even adventurous people looking to try something new.

Top Utica restaurants:Here are the best restaurants in Utica according to Yelp. Did your favorite make the list?

Brooklyn-based roasters Sey and Hugo Tea from Missouri will be Superofficial’s providers. The menu will include espressos, Americano coffee, cappuccinos, lattes and a variety of teas and syrups made at the coffee shop. Superofficial also will feature appetizers and pastries.

The coffee shop will also have reusable Huskee cups. To incentivize their use, coffees will be discounted to those who bring their cup. However, single use cups will be available for those who prefer them.

Besides the physical location, Superofficial also will have a coffee cart that Matwijec-Walda will take to other businesses and events. He said he wants to bring coffee directly to people.

“It’s not just like opening your shop at 6:30 and selling coffee every day to the same hundred people,” he said. “It’s more about impacting other businesses and people that you don’t see everyday, getting to know them and then inviting them in.”

Art and coffee for everybody

This synergy will bring people into the coffee shop and expose them to local art and vice versa, Chrisman said.

The two friends said there is an elitist attitude toward specialty coffee and in the art world but their goal is to make the two accessible for everyone, from experts to amateurs. Ultimately, it’s about sharing an experience and creating a human connection, Chrisman said.

With new housing projects, restaurants, music studios, an independent bookstore and the Capitol Theat, Rome has a lot of potential, Matwijec-Walda said. The two friends want to be part of the activity and bring something new and irreverent, he added.

“We’re not reinventing the wheel, we’re doing something that’s been shown to work,” Chrisman said. “We’re just doing it in a place that we love.”

Maria M. Silva covers food, drink and culture in the Mohawk Valley for the Observer-Dispatch. Email her at [email protected]

Fri Mar 25 , 2022
Cha Wa is based in New Orleans, and took its name from a slang phrase used by Mardi Gras Indian tribes meaning “we’re comin’ for ya” or “here we come.” (Special to the American Press) By Mary Richardson Two high-powered concerts of Louisiana music plus the opening of a national […] 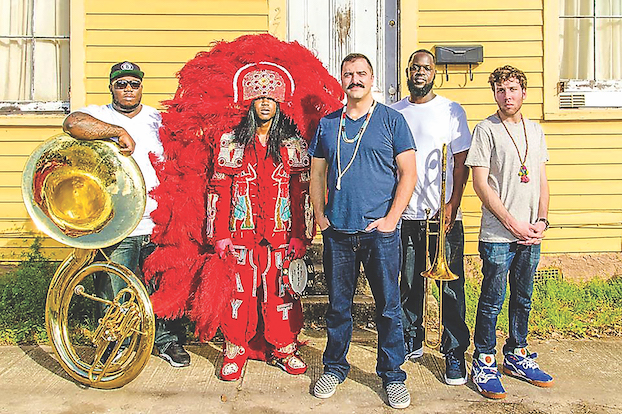