JOHN D. POLING
For The Pantagraph

Part of the joy of the decade that was the 1970s was our garish style choices. The patterns, the colors, the collars, the flair — the gold lame. What were Americans thinking!?

We could choose to be in denial about all the tacky excess of the “Me Decade” except — why?? — when the Conklin Players of the Barn III Dinner Theatre have so much fun with it in their latest production “Live From The Barn: It’s The ’70s!”, playing now through April 10.

Yes, the costumes live up to all the gaudy glory of the ’70s. And the wigs? Well, there were so many it was surprising a “wig wrangler” wasn’t listed in the program. But our fondness for the 1970s would be but a faint whisper if all it was based on was questionable style choices. The ’70s, however, had a lot of kick-butt music; Sirius XM doesn’t have an entire channel devoted to it for nothing. And it is in the music where this latest Barn production hits the high notes.

I could sing the praises of the seven performers (and I will in a bit), but the real star of this show is not on stage — he’s the head writer, Jimmy LaHood. It’s LaHood (who has to be at least a child of the ’80s) who understands that the ’70s satisfies. The younger crowd digs its kitschy comedic vibe along with a lot of great songs. To the more-seasoned folks it feels nostalgic, familiar and communal. A time when we all watched the same three channels and knew all the popular TV shows. (Come on, watch PBS? Not in primetime, baby.)

But where LaHood really shines is in song selection and mixing. In a two-hour show, he manages to squeeze in nearly a hundred ’70s tunes. And that’s not counting another two dozen featured in a “Name That Tune TV Trivia” sketch. One marvels how well he blends so many divergent songs into medleys that just keeping popping out one great tune after another.

Is there a plot? Nominally, but one isn’t really necessary. Detective Colombo (Nate Gaik) drifts in and out of the show to search for the “murderer” of John Travolta’s ’70s personas. It’s silly and fun; and Gaik has a blast at several points during the show partnering with his real-life spouse Pat Gaik in classic ’70s comedy sketches — the best of which is an ode to Johnny Carson’s “Carnac the Magnificent.” Hiyooo!

And then there’s the music. The songs just seem to bring out the ’70s sweet spot in Tamra Challacombe. Whether it’s Karen Carpenter, Helen Reddy, Toni Tennille or Cher, her voice is a piece of ’70s sugary pop confection — and perfection. Sagan Drake channels her inner disco diva on “Last Dance” and “I Will Survive.” Newcomer Daniel Olsson makes a big splash in his first Barn production. He is featured in much of the show, and while he may play a sappy ’70s tune like “Shannon” (about the passing of an Irish setter) for laughs, it’s clear this tenor has some vocal chops. I predict we’ll be seeing a lot more of him.

You may ask, “Is there a place for hapless Dan Challacombe in this production?” Of course there is. (Steve Martin fans won’t be disappointed.) The billing for Dave Windsor should probably be “special guest star,” since he only shows up once near the end of Act I, but he sings one terrific Barry Manilow medley, nimbly navigating some of the trickiest song transitions in the show.

And did I mention the food? Try the brisket, it’s delicious!

Receive the latest in local entertainment news in your inbox weekly!

Surrounded by Wealth, an Artist’s Comment on Education Loses Its Edge

Mon Mar 21 , 2022
One of my companions burst into tears when looking at Brier Patch, Hugh Hayden’s new installation in Madison Square Park. This wasn’t because of the artwork itself, which she proclaimed “cool and ugly at the same time.” It was because answering my question about what she thought of the work […] 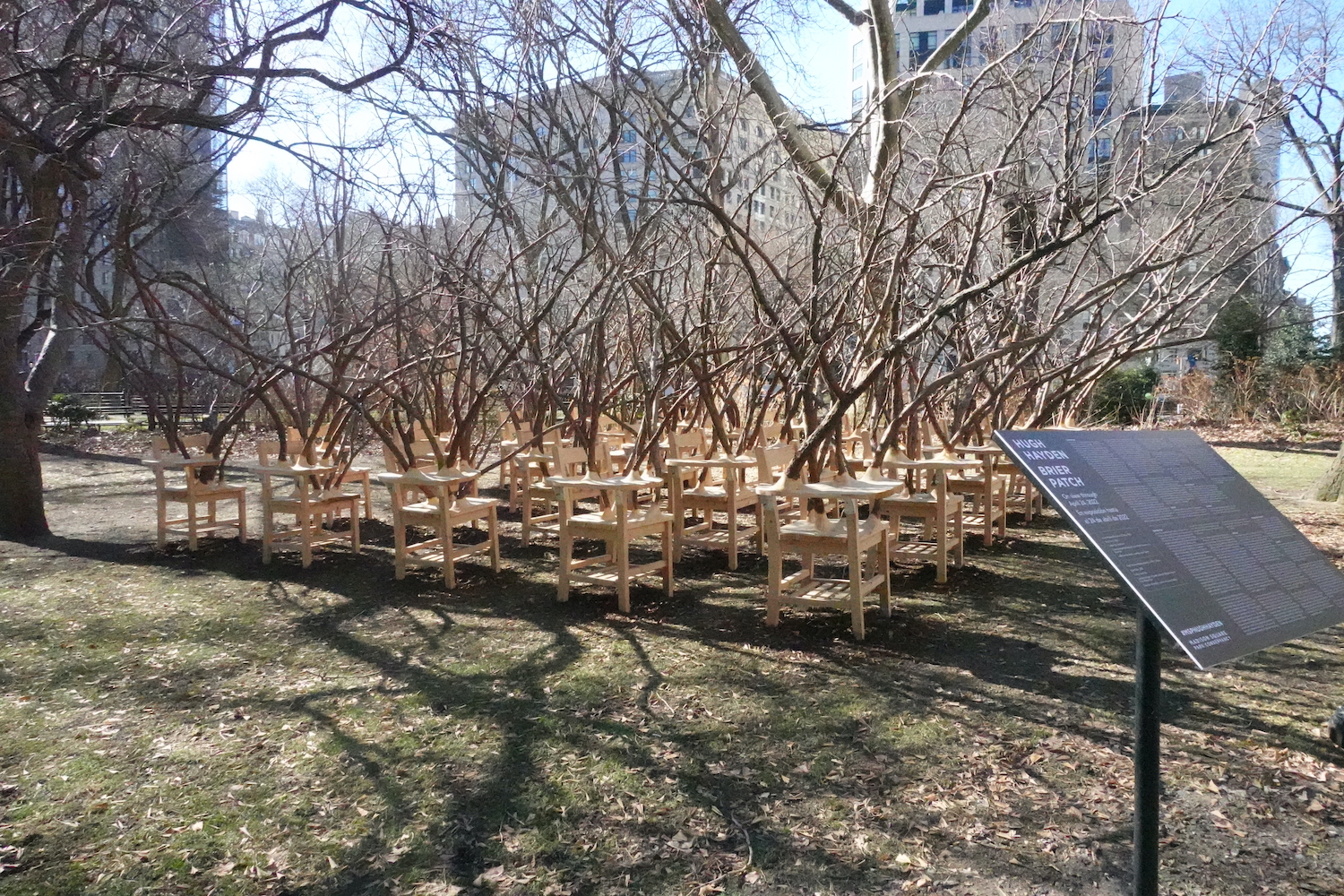